In 2007, the new window created by Gerhard Richter was unveiled in the south transept of Cologne Cathedral. The window, which is impressive by its sheer size and embedded in Gothic tracery, consists of more than 11,000 coloured glass squares. It is the result of a long process of discovery and is based on Richter’s colour chart paintings of the 1960s and 1970s.

The first works – based on colour sample cards from specialist painters’ shops – show colour fields surrounded by a white border. In the course of time, the grid structure was reduced to the basics, until finally the colour fields were right beside each other without being divided by a white strip. The composition of the colours was determined by the principle of chance. With Untitled (Nine Colours) from 1973, an example of these early works can be found in our exhibition. A painterly quality can still be perceived in this work executed in lacquer paint.

Richter was able to draw from the rich fund of his painterly past and to further develop his ideas for the future. The renewed interest in this theme, inspired by the commission to design the window for Cologne Cathedral, led to a series of square colour fields of varying sizes, ranging from combinations of four to 4,900 colour fields. Whereas the early works were mainly created on canvas, these more recent works are executed in lacquer on dibond aluminium. Our exhibition includes examples of these works, including several Quattro Colori from 2008.

As a kind of continuation of the colour fields, we also show a selection of Gerhard Richter’s Strips in our rooms. The origin of these works is very different to that of the colour fields. Their colour composition was not left to chance. Instead, they are without exception based on details from Abstract Painting (724-4). This painting from 1990 served initially as a model for the tapestries Musa, Yussuf, Iblan and Abdu, among other things, which were created in 2009. For their design, parts of the painting were rotated, mirrored and multiplied on the computer.

The book Patterns, which was published in 2011, is based on this idea. The book continued the theme, and increasingly smaller, psychedelic-looking patterns were created. The details that served as the basis were reduced in width so that they finally resulted in simple stripes.

These rather sober works demand a lot from the viewer. The interplay of colour and changing width of the stripes creates an effect that lets the lines step back and forth and does not allow the eye to rest.

In contrast to the colour fields, which initially had a painterly structure that was ultimately replaced by a smooth surface without brushstrokes, the Strips, which are digital prints presented in various ways, have no texture whatsoever. In their completely impersonal neutrality, they invite us to question and redefine the idea and execution, in short, the whole concept of painting.

Opening times: Monday to Friday, 10am to 3pm and by appointment. 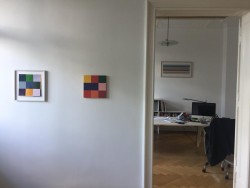