“Why are other paintings hanging next to these Titian masterpieces?” wonders a visitor out loud. “Isn’t the work of Titian good enough? Don’t you think that other artist is too confident presenting his work next to this masterpiece?”
“That other artist is called Gerhard Richter,” explains a helpful museum attendant. “And he is one of the world’s most important contemporary artists. This exhibition shows their interaction and the inspiration Richter feels for Titian.”

This conversation takes place at the prestigious exhibition Tizian/Gerhard Richter – Il Cielo sulla Terra (Heaven on Earth) at Palazzo Te, where five rooms are dedicated to the relationship of those two artists and to the theme of the Annunciation. The tone is set from the start, with Titian’s Annunciation of San Rocco (1539 ca). For many of the visitors who are startled by the pairing of the two artists, it’s possibly the first time they’ll have seen Richter’s work in real life.

The story that this exhibition sets out to tell starts in 1972, the year that Richter took part in the Venice Biennale for the first time. During a visit to the Scuola Grande di San Rocco, he recognised Titian’s quality. „The thing that makes great works of art great“[1] and decided to copy the painting of the Annunciation. Since then, the story goes, the dialogue with the ancient master from Cadore has remained a constant underlying theme in Richter’s work.

The exhibition is strictly curated down to every detail, starting with two masterpieces by Titian: the Annunciation of San Rocco and another of Il Raffronto (1558-1559 ca), now in the National Museum of Capodimonte. Richter got deeply involved with this exhibition, contributing 17 works directly out of his studio. The architect Piero Lissoni took care of the installation and the graphic design to stage and enhance this collaboration.

If we look closer at the Annunciation painting of Il Raffronto, we see how the great master of the Renaissance transforms with an explosion of colour a scene of Christianity linked to the “Conceptio per aurem” (through the ear of the Virgin) through silence in an apotheosis of the sky.
It is said that Titian, now in a more mature phase of his career, didn’t want to work any more with the sort of traditional perspective that was used by a lot of other artists at that time, but he expressed the story uniquely, via his way of painting and use of colour. His canvas is set up with heaven, the clouds and the light of the Holy Spirit that illuminates the two protagonists: the angel Gabriel and the Virgin Mary.

“What courage for this Richter to compare himself with the old master,” observes a visitor, walking to the next room. “He didn’t compare himself,” retorts the attendant, “He has been inspired by him for decades, and this is the story of that inspiration.”

Richter’s goal was not to reproduce the painting techniques of Titian but to focus on the original motif. The elements remain identical. For example, one of the colours Titian uses most is red. Richter also pays homage to Titian’s use of red, which was precious in ancient times and is still a fashionable colour today because it emphasizes femininity. Richter’s works are not only explored by theme (themes of the Annunciation and the connection between heaven and Earth), they are also explored and connected through colour. They are also linked by a focus on the feminine, as he represents the female presence in his life expressed in the images of his daughters, Betty (1977/2013) and Ella (2014), and of his wife Sabine (in Small Bather, 1996). In the last room, with Blood Red Mirror (1991), he closes the story. Here, Richter presents a red mirror of the colour of Titian’s Virgin dress. It is completely dedicated to Titian’s use of red.

“So this Richter has been very brave. Look how diverse his work is!” onlookers say to each other, while comparing Richter’s abstract work with the Blood Red Mirror.

And yes, with this exhibition, with this tribute to two artists who are so important and yet so far apart in time, Richter has shown the Italian and international public that he is the great master of this era. Being able to establish a dialogue with Titian in theme, colour and femininity, in his own way, made him vulnerable and humble at times.

Richter has an ability to connect with not only the visitor who knows his work and his story, but also with the visitor who is encountering his work for the first time. Both groups are emotionally touched by his tribute to Titian, a meeting of two artists who are both symbols of their historical and cultural moment, and who both have an astonishing ability to mediate heaven on Earth.

Art – or at least great art – is always contemporary.

Titian/Gerhard Richter: Heaven on Earth, curated by Helmut Friedel, Marsel Grosso and Giovanni Iovane, will be on display at Palazzo Te, Mantua until 6 January 2019. More information can be found here. 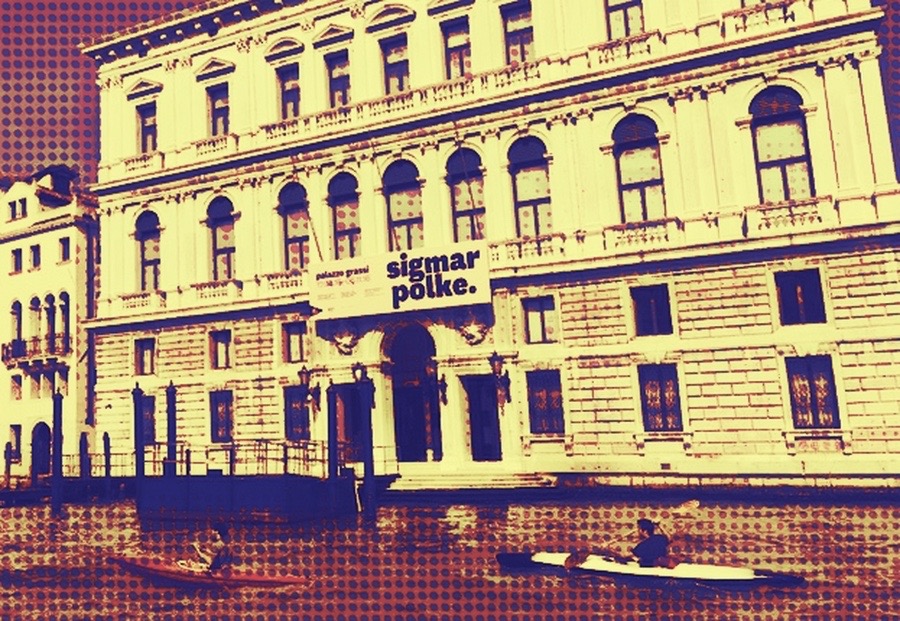 12. October 2016
Julia Linsen (Venice, Italy) Currently running is the Sigmar Polke retrospective at the Pinault Foundation, Palazzo Grassi, in Venice. This year marks the 75th anniversary of Polke’s birth and the 30th anniversary of his participation in the 1986 Venice Biennale, where he.. View Article